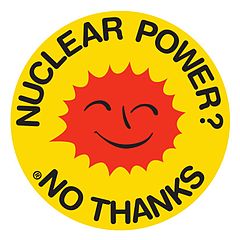 If it gets out of control it could destroy the entire fossil fuel industry on this planet.

We have managed to keep it in check so far but we can't afford complacency. Forty years ago, before our campaign was well-established, we lost France and Sweden's electricity sectors when they abandoned coal and oil for nuclear. Since then we have slowed and even reversed its spread with our campaign to portray it as dangerous, dirty, and slow and expensive to build (the latter qualities being ones we have been able to positively influence!).

We have generally been successful in demonising the safety of nuclear:

For these successes we must thank our friends in the "environmental" movement, especially Greenpeace, Friends of the Earth, the Sierra Club, and the Green Parties of various countries. Particular congratulations must of course go to Germany's Greens whose role in their country's Energiewende policy and nuclear shutdown has resulted in a boom in the mining and burning of Lignite coal, with further increases promised as the remainder of their nuclear fleet is terminated.

But, as we cautioned earlier, we cannot afford to be complacent. In Canada as recently as 2014 coal, which a decade earlier generated a quarter of Ontario's electricity, was completely wiped out due to upgrades to reactors at the province's Bruce nuclear power station. Canada, despite our stronghold in Alberta with its tar sands extraction industry, is a particular danger spot:

Although we have been successful in closing working nuclear power stations, such as that at San Onofre, replacing them with gas, and we are confident of doing so at Diablo Canyon in California and Indian Point in New York State, we are meeting spirited opposition from a small bunch of activists, many of them defectors from the anti-nuclear "environmentalist" movement - including even former Greenpeace top rank officials such as Patrick Moore (although not so effective amongst environmentalists due to his public rejection of the climate change hoax) and, until his recent death, Stephen Tyndall.

One group in particular - the "Ecomodernists" - includes some well-respected former stalwarts of anti-nuclear activism such as Stewart Brand and Mark Lynas, as well as several younger European activists. The veteran British environmentalist George Monbiot also disturbingly broke ranks from the anti-nuclear position shortly after Fukushima, attempting to draw attention to the lack of serious consequences of that event, but fortunately has not spoken about the matter since.

Also even one of our formerly stalwart supporters, the Union of Concerned Scientists, has lost its nerve and revised its position on nuclear power. Not to wholehearted endorsement, thankfully, but they have retreated from full opposition.